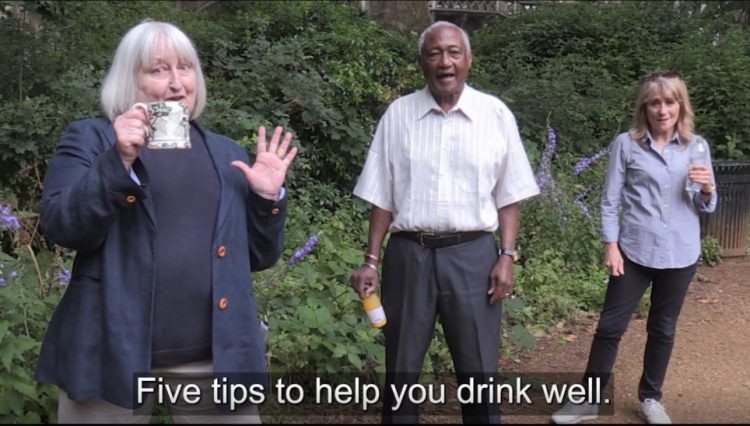 Dehydration is associated with a higher risk of ill health in older people, from having an infection, a fall or being admitted to hospital.

We conducted a research study at University College London (UCL), funded by the National Institute for Health Research School for Primary Care Research (NIHR SPCR), exploring the views of older adults on the topic of hydration. We identified key barriers and facilitators to support older people to drink well. We recently created a public campaign video (supported by our older volunteers) to share the top 5 tips to help older people drink well and stay hydrated.

An appetite for food and drink can diminish as people age, so older people should drink regularly, even when they’re not thirsty. Older women who don’t have to restrict their fluid intake for medical reasons, are advised to drink 1.6 litres a day (that’s about six and a half tea cups). For older men, it’s 2 litres a day (that’s eight tea cups).

The easiest way to drink more fluids is to build on existing habits. For instance, drinking more fluid as part of everyday routines, such as when taking medication or at mealtimes. If you build this up gradually in small steps, eventually it will become part of your routine.

Keeping up your fluid intake shouldn’t be a chore – drink more of what you enjoy. A common myth is that you have to drink water, but tea, coffee and juices all count.

Thirst is seen as a reliable indicator of when you need to drink, but the perception of thirst can blunt with age. An over-reliance on thirst alone to reach for a drink may increase your risk of dehydration, so it is important to be mindful of drinking fluids regularly even when you’re not thirsty.

Another myth is that avoiding drinking can help urinary incontinence. However, limiting fluid intake makes incontinence worse because it reduces the bladder’s capacity.

Some people wonder whether hydration benefits our health at all. Many people don’t believe that drinking too little can affect their wellbeing or have serious health consequences. But older people, in particular, are more vulnerable to the effects of drinking too little due to age-related bodily changes or drug side-effects, or both.

By 2046, the percentage of people aged over 65 is predicted to rise from 18% to almost 25% in the UK. As the climate crisis worsens and heatwaves become more common, the incidence of dehydration-related deaths is also set to increase.

Until now, little research has been done on the views on hydration of older people who don’t live in residential or care homes. To address this we conducted one-to-one interviews with older people aged over 75 who lived at home in London, England. We also interviewed nine carers.

We found that perceptions of the importance of hydration were greatly varied. While interviewees were somewhat aware of public health messages on hydration, many misconceptions existed, such as how much and what to drink.

Some of the greatest barriers to getting the optimal fluid intake was an overwhelming fear of incontinence and difficulty getting to the toilet. In such cases, it is important to drink plenty of fluid to not exacerbate the problem. Opting for decaffeinated tea and coffee can help. It can be useful to plan trips ahead of time, locating the nearest toilet and planning for loo breaks.

Another challenge identified in our study was difficulty using kitchen equipment and cups as participants got older, such as the kettle becoming too heavy. If you notice that everyday items are becoming more difficult to use, it is important to discuss this early on with friends, family or carers and explore the options. A lightweight kettle, a straw or tailored cups can make all the difference and are widely available.

Our study concluded that the optimal way of supporting older people to drink more was to acknowledge and address individual barriers to drinking and build on everyday habits, such as drinking with medications and encouraging drinking as a pleasurable, positive experience.

(Link to publication can be found here)

Cini Bhanu is a General Practitioner in London and a Clinical Research Fellow at the Primary Care and Population Health Department at UCL. She is currently doing a PhD funded by the Dunhill Medical Trust. Over the last four years, Cini has been working in ageing research on a range of projects including nutrition and hydration, mental health in older adults and risks of multiple medication use. The current campaign has been supported by the UCL Policy Engagement & Impact Fellowship.