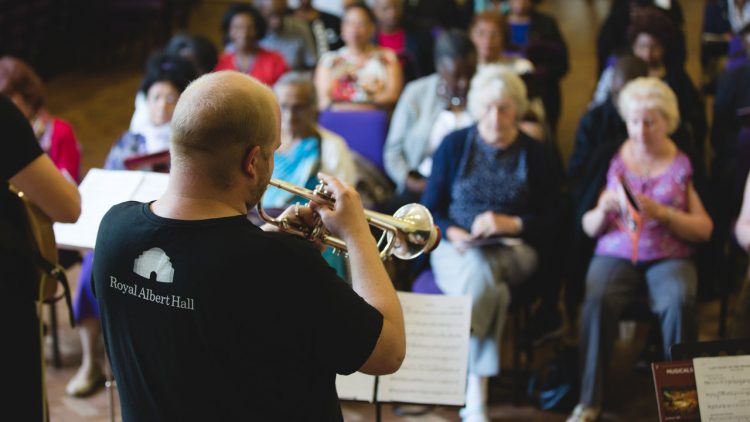 In a recent blog for the Wellcome Collection, Philip Ball wrote that music, as a fundamental form of communication, is essential in engaging individuals living with dementia. “A loss of verbal capacity” doesn’t mean that heartfelt discourse is no longer possible.

For people of any age, research has found that music can inspire particular emotions or senses, conjure vivid memories, and create an atmosphere of collaboration, euphoria and closeness.

In some cases, individuals suffering from age-related illness have recognised loved ones after listening to favourite songs. Research by the charity Music For My Mind has advocated for inclusion of music in the standard therapy for dementia. Many of an individual’s most robust memories will be their earliest, including the music of their teenage years and all its associated emotions.

Live music in particular is able to create this effect even more vividly – by bringing the performance and collaboration directly to the viewer, and creating an event where groups of people can enjoy similar sensations, together.

For many older people though, attending live music events is prohibitively difficult due to the strenuous requirements for travel, access, and stress.

Research conducted by the Royal Albert Hall showed that more than 60 per cent of people in this age group didn’t get the chance to hear as much live music as they’d like – with all its associated benefits – largely due to a lack of money, mobility or suitable concerts.

Working on this basis, since 2013 the Royal Albert Hall’s Songbook programme has been, in Dame Vera Lynn’s own words, “bringing live music to those who might not otherwise be able to take part in it”.

These completely free, interactive concerts are taken directly from the Royal Albert Hall to a variety of locations including care homes, hospitals, day centres and hospices, throughout London and the London Home Counties.

During the one hour presentation, three musicians from Albert’s Band take participants on a journey through the back catalogue of incredible songs that have been performed at the Hall by artists including Dame Vera Lynn, Sir Tom Jones, The Beatles and Frank Sinatra.

Each participant receives a special souvenir brochure containing the words to all of the songs and photos of the artists from the Royal Albert Hall archive.

One care home manager who received a Songbook concert last year remarked that “the way that music affects people who can otherwise spend long periods of time in a distressed or confused state is wonderful, and it was really special to see this.”

Songbook was launched as part of the Royal Albert Hall’s Education & Outreach programme in 2013. It has flourished since then; in 2017 alone over 80 Songbook concerts were presented and since its inception Songbook has stopped by every London borough. It has now visited over 6500 older adults, and given many of them their first experience of live music in years.

Email education@royalalberthall.com for more information. Dates for April and May will be released shortly.

The Songbook programme is kindly supported by Prudential plc.