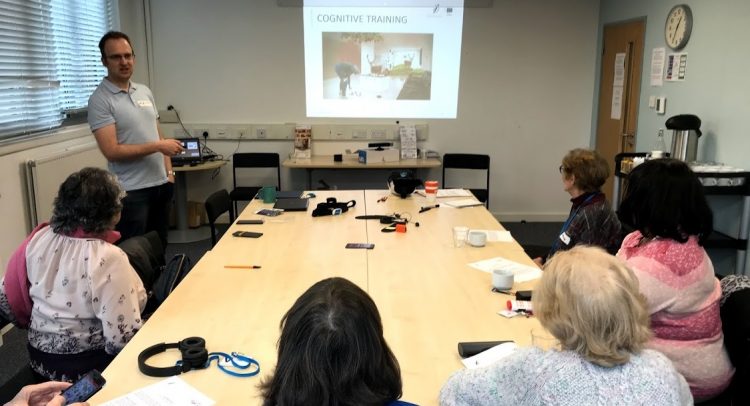 Age UK London is one of thirteen partners across seven European countries involved in Holobalance – a 3-year EU-funded development programme. The overall objective of Holobalance is to improve the recovery experience of older people with balance disorders by developing and validating a new personalised virtual coach platform which can provide motivation and guidance. The coaching will involve holograms and augmented reality games, along with easy-to-use sensors (smart bracelet, smart glasses etc.) that can be customised to coach the user with specific, individualized exercises to aid their recovery.

We’re delighted to be involved by ensuring that the design does not exclude the older people that will eventually benefit from Holobalance. Age UK London believes that we can help to change and improve the technology by ensuring that older Londoners are involved in the early stages of user testing and that as a result, Holobalance will be a more inclusive product that works better for everyone, especially the people who need it the most.

Our role within Holobalance is to bring the voice of older people to the project.  We campaign on behalf of over 2 million older Londoners that live in the capital and we work closely with over 500 small grassroots older people’s groups and organisations. Accordingly, we’re well placed to contribute to Holobalance by consulting with older people on the project’s development as well as testing out potential tools and resources with them before feeding this valuable information back into the overall projects development.

Age UK London introduced a small group of older people to the 2nd plenary meeting held in London in April 2018.  It was agreed at this meeting that a larger focus group would be invaluable and this was held at our offices in partnership with the University of Hamburg in June 2018, where we gathered feedback on the overall viability of Holobalance.

Following the 3rd plenary meeting that took place in Venice, Kings College London and Age UK London agreed to hold two small focus groups in order to discuss the study protocol and get direct feedback on the proposed system and also to take a look at some of the potential sensors that would be used and whether it would practically work in the home.

Both of the focus groups took place at Age UK London over two dates, November 23rd and November 29th. Matthew Liston, Senior Research Fellow at the Centre for Human and Applied Physiological Sciences at Kings College London and Sharon Tynan of Age UK London demonstrated and explained the purpose of an array of wearable sensors and gadgets on the day including, insoles, heart rate monitor, augmented reality headsets and accelerometers.  The older people in attendance had many questions about the kit and how long one would need to wear it as well as how it would work. The older people brought their wealth of knowledge to the focus groups and came up with good practical ideas about Holobalance and its future development.

In attendance over the two days were 10 females and 4 males ranging in age from 66 to 84 and covering an ethnic mix reflecting the London population.

We’re very happy with the progress with the project so far, and we hope that by ensuring older peoples’ voices are heard throughout the project, the product will work better for those who will eventually be using it.