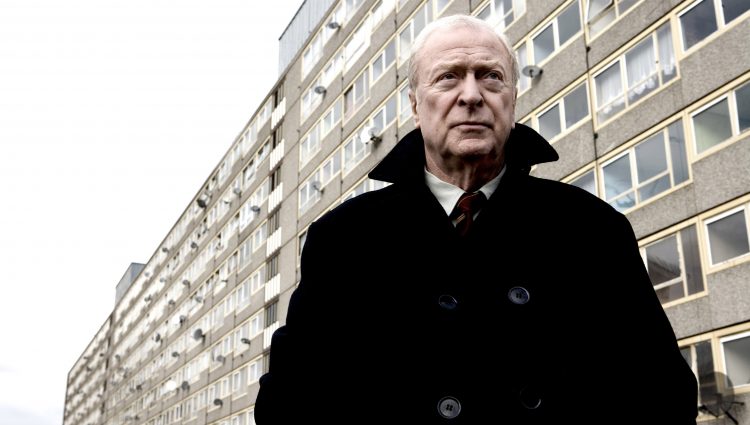 Welcome to the eighth edition of our monthly series on ageing in film. This month, Danny Elliott discusses isolation and loss of community in the vigilante thriller Harry Brown. For something a little less aggressive, try last month’s study of love and relationships in Roald Dahl’s Esio Trot here.

I first watched Harry Brown seven years ago. Before viewing it again this week my memory was of some form of horrific, vigilante buddy-movie starring Michael Caine and Filch from Harry Potter. Time had clearly faded the reality of what the film was about, if not the essence; though a ‘buddy-movie’ this is not!

The film is set in a London council estate that is ‘run’ by delinquent youths. We’re introduced to Harry Brown (Sir Michael Caine), an ex-Marine, as he wakes from a night’s sleep to hear a radio report of a young mum who has been shot and killed.

The young people, mostly teenagers, terrorise the local residents. They occupy and block local subways, meaning people have to walk much further than they should to head to the shops or visit family. They buy and sell drugs openly. Many own and carry knives and guns.

Brown, whose wife dies near the beginning of the film, has one good friend – ‘Len’, played by David Bradley. Len is being bullied by some of the young hooligans, and tells Harry that he’s finally had enough of them. When Harry suggests he contacts the police, Len pulls a huge knife out of his pocket and says he’s going to kill them instead; he ends up being murdered with his own knife in an attack filmed on a mobile phone.

Harry is devastated, and ends up on a one-man-mission to avenge Len and purge the estate of the troublemakers.

As the murders rack up, the police begin to close in, suspecting one of the young ringleaders. One officer keeps her eye on Harry Brown, but when she brings her theory to her commanding officer, she gets the brilliant response: “What you’re trying to tell me is that this escalating violence is down to a vigilante pensioner?”

I won’t spoil the twists and turns of the film, but the film ends with an older person once again being free to walk through the subway – unthinkable at the start.

The movie itself is gruesome to the point of comic at times, with CGI blood-splatters that could easily have come from a Tarantino movie. While some of the scenes are unbelievable (Harry Brown wandering into a drug-farm for instance), the film is hugely entertaining – you root for Harry the whole way as he moves through a harrowing tale that touches on some real social issues.

Michael Caine puts in a tremendous performance as the leading man. He was 76 when this film was released – and at 84, he’s still working today. I can’t condone the lengths Harry Brown goes to rid his estate of violence (though he is successful – we’re told crime goes down by 33% as the film ends!) but it is refreshing to see a film portraying an older person as far away from a stereotype as possible. He doesn’t even find a young apprentice to train up to do his bidding – he takes matters into his own hands, uses his experience and takes on people over half a century younger than him.

James Bond he is not. One thug gets away from Harry Brown because he has emphysema – there’s no way even Daniel Craig’s portrayal of 007, far from untouchable, would be diagnosed with that.

Loss of community plays a huge role in the dilapidation of the estate in this film. Older people have been pushed to the side, and the younger residents treat them with disdain at best. Age UK London support intergenerational campaigns whenever we possibly can because fostering good relationships between people of all ages is essential to creating a working society.

Looking out for your older neighbours, checking they’re ok in colder weather, stopping to have a chat before going inside – all these things engender better communities and are small – seemingly insignificant – ways we can provide security and interaction for older people.

I used to live in a flat above an older lady in Kingston. She’d lived there for over 60 years, and I quickly realised that I could really help her out by doing a few very easy tasks. I began to take her bin to the pavement on bin-day and cut her grass. One winter, when the weather was particularly bad, my wife and I did her food shop for a couple of weeks, and I picked up bread and milk for her on a number of other occasions.

On average, across a year, I probably spent 10-15 minutes a week doing these very small things. We sent postcards to her from holiday and brought back Gingerbread from Grasmere – I can still remember seeing one of those postcards on her mantelpiece, and realised how important those small gestures were.

Community is being eroded more and more. The estate portrayed in the film will be far from the reality of most people, but we can all do our bit to ensure older people we know are valued and supported.

Both Len and Harry are clearly very lonely. At least they have each other, but they don’t seem to have anyone else. Only the Vicar and Harry are present at Len’s funeral, and we find out that Harry had a daughter who died when she was 13.

44,000 older people in London are chronically lonely – on a weekly basis, they have no ongoing relationships. The odd ‘hello’ from the postman or cashier isn’t enough. For older people who have difficulties getting out and about, they are even more likely to be lonely. The Jo Cox Commission on Loneliness recently had a month-long spotlight on older people.

The tagline for the spotlight was simply #HappytoChat which is definitely the first, but far from the only, step in alleviating loneliness.

Peter Bradshaw’s Bechdel Test Score: 5/6 Yet again, no Celia Imrie is the only let-down in Harry Brown!