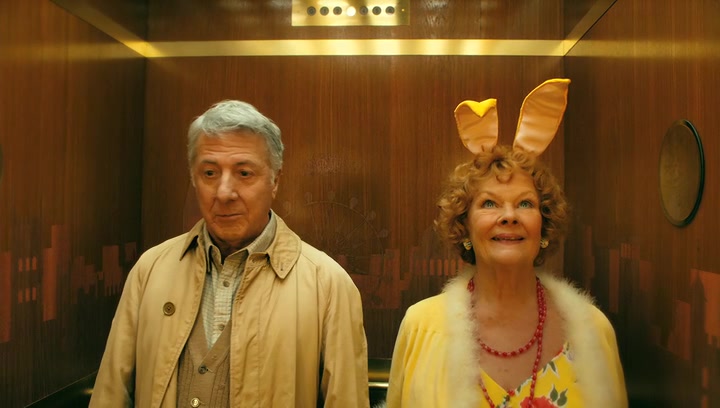 Welcome to the seventh edition of our monthly series on ageing in film. This month, George Harvey studies Roald Dahl’s Esio Trot and the ways in which is depicts love in later life. You can also read last month’s article on BBC Scotland’s Still Game here.

Yet in comparison to much of his work, Esio Trot is a relatively sedate tale with very little to relate it to the fantasy worlds of Charlie and the Chocolate Factory or George’s Marvellous Medicine. Yes there’s the inclusion of a magic spell, but this is quickly revealed to be a far more mundane piece of trickery. Now this may initially lead you to question whether Esio Trot is an especially good choice of story to make into a film. Luckily, the strength of the story holds out without any need for any phantasmagorical elements.

The story centres on Mr Hoppy (Dustin Hoffman), a shy older man who admires his neighbour in the flat below, Mrs Silver (Dame Judi Dench). In an attempt to become the object of her affections, Mr Hoppy offers his neighbour a set of magic words to help her tortoise Alfie grow to into the large and more dignified creature she so desires.

Doubtful at first, Mrs Silver starts to use the magic spell the designated three times a day and soon sees Alfie growing in size:

Unbeknownst to Mrs Silver however, Mr Hoppy has purchased nearly every tortoise in town and has been replacing Alfie with steadily larger counterparts using a homemade extendable claw. Mrs Silver is delighted with the transformation and for a while it seems that Mr Hoppy will win her hand in marriage away from his rival Mr Pringle (Richard Cordery). Unfortunately, an escaped tortoise sees the whole ruse collapse and Mr Hoppy loses touch with Mrs Silver and soon plans to move apartment.

It is only when he pops downstairs to say a last goodbye that Mrs Silver forgives her neighbour and admits that she had always admired him yet was too shy to ask him out on a date. Mrs Silver goes on to explain that she often dreamt up ways to bump into Mr Hoppy in the lobby so that they would have to spend time in the lift together. Fully reconciled, the couple agree to marry and dance around the apartment.

Now from the outset it’s worth noting that as love stories go, Esio Trot is a somewhat problematic one. Whilst the lengths that Mr Hoppy goes to could be perceived as cute and endearing, there is something rather troubling about a man who tricks their way into someone’s affections. Were it not for Mrs Silver’s revelations at the end of the film as well as the fact that Mr Hoppy is forced to come clean, it would be a wholly unsatisfying conclusion.

Esio Trot as a whole is a really enjoyable watch though. Hoffman and Dench are superb in creating characters which are so endearing that I didn’t even mind James Corden’s turn as the film’s narrator.

Yet perhaps the best aspect of the film is the respect it pays to older relationships. Many films overlook older characters altogether and it is rather uncommon to see a movie that acknowledges a budding romance between older people. Even then these films often result in a tragic conclusion or see such relationships played up for laughs.

By contrast, Esio Trot gives time to the growing love between Mr Hoppy and Mrs Silver, providing the audience with a glimpse into the ways in which romance can develop in later life. Mr Hoppy doesn’t focus upon the age of his neighbour; instead he sees her beauty, humour and personality. It’s certainly a refreshing change to the way many films look at older relationships.

Though not a perfect film by any means, Esio Trot is a fun flick that holds your attention and provides a feel-good finish. Definitely one to explore if you get the chance.