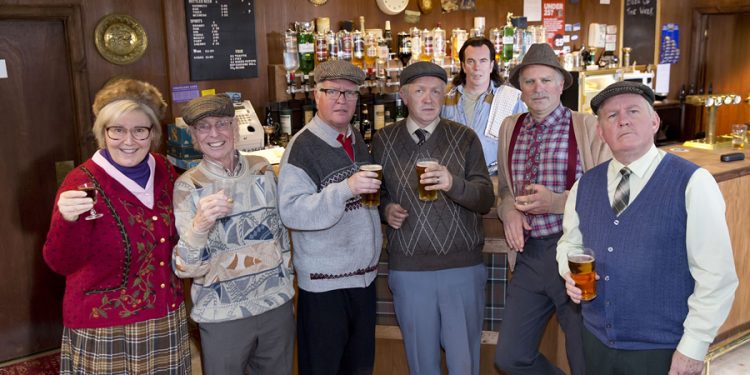 Welcome to the sixth edition of our monthly series on ageing in film. This month, Danny Elliott studies BBC Scotland’s Still Game and highlights the difficulties encountered by many older people when trying to keep warm in Winter. You can also read last month’s article on the film Nebraska here.

I opened one more box set on Christmas Day, and was surprised to find I’d never heard of it: Still Game, A BBC Scotland comedy created by Ford Kiernan and Greg Hemphill.

Six series of a programme bought, and therefore recommended, by one of my best friends – brilliant!

The show follows the lives of best friends Jack Jarvis and Victor McDade, two Glaswegian pensioners played by the show’s creators, who live on the same floor of a block of flats in Craiglang, a fictional area of Glasgow.

Jack and Victor, with a supporting cast – including Winston, Isa, Tam, Bobby and Navid – speak with Glaswegian accents and use Glaswegian phrases, making Still Game a huge success in Scotland and perhaps inaccessible to some people in England.

I am proud to have been born in Glasgow, and lived in Scotland until I was 11, returning for a year to study in my early twenties. Still Game is filled with nostalgia for me, and I can’t recommend it highly enough – it’s currently available on Netflix.

As well as showcasing hilarious dark humour and offering a genuine insight into life in a faltering community in Glasgow, Still Game really gives a reflection of life as an older person. While Kiernan and Hemphill are much younger than the characters they play, they create a realistic and empathetic picture, of what it’s like being in your seventies.

I want to bring your attention to one episode in particular – Series One, Episode Three – named ‘Cauld’; Glaswegian, of course, for ‘cold’!

The episode starts with Victor telling a friend to be careful in the cold weather, ice could cause them to slip.

His advice: “It’s a pair of these you’re wanting! Permagrip soles, Timpsons, £19.99! You’ve got to take care of yourself at our age!” Moments later, they’re both on the floor, permagrip soles notwithstanding.

The whole episode revolves around the weather, the potential consequences of freezing conditions and what the pair do to warm up. It contains some of the blackest humour I’ve yet to see in the series, but also explores issues that older people from across the UK, and London in particular, will find relatable.

Jack and Victor decide to go and see Willie Napier, a friend who hasn’t been well lately. They knock on his flat and there’s no answer, and Victor postures: “He’ll be lying deid! Stiff and blue! Eyes staring! Pointing at you! “Ja-a-ack! Where’ve you been, Jack? “I’ve been deid since Thursday!””

Of course, when they finally get into the flat, they sadly find Willie has indeed passed away.

While this is fiction, the story is very much fact. It’s a tragedy that in 2014/15, the latest confirmed figures, there were 4,040 excess winter deaths in London, almost all of them older people. Older people die because of cold weather every single year, up and down the country. In London, 2014/15 saw the most deaths since 1999/2000.

After going home, Jack and Victor talk about the fact it’s cold enough to ‘cut the face aff you’:

Jack: “How are you supposed to get a heat with the pension they gie you? I know! Millions the Government spends on pamphlets, telling you what, eh? “Put on a cardigan!” What is it they say? “Keep yourself warm this winter! Don’t squander money on food.””

Jack: “Aye! Or medicine! “Scrimp and save every ha’penny you’ve got and give it to the Electricity Board!” To hell with that, Victor, eh?”

Many older people in London do have to make a choice between heating and eating, between food and fuel. Stay warm and go hungry, or eat, and stay cold.

Victor refuses to put on the fire, instead suggesting they just put on the bulb as it ‘suggests warmth’. Jack responds: “You know what’ll happen to us, don’t you? What? We’ll end up in the same nick as old Willie. Sitting here with these cups welded to our hands. Two more statistics, cos you won’t burn the bloody fire!”

Poor quality housing, increased food costs, smaller pensions, the huge deficit in social care and astronomical fuel bills all contribute to the potential for real people, living in London today, to be included in the statistics.

The scene cuts to Winston, Jack and Victor’s friend, sweating in his own flat, drinking iced drinks to keep cool. He has a ‘system’, a magnet on his electricity meter, that means he doesn’t pay for what he’s using; which turns out to be a huge amount as he’s  bought several electric fires from the local market.

Jack and Victor protest, but Winston is able to rationalise what he’s doing:

“We work a’ our days, and for what? To sit freezing, eh? Wondering if the phone’s gonna ring, waiting for the Reaper?! A [moment] away from eating dug food! It is that bad! The Government want us to die! They expect us to die. Blair’s like that, ‘Government lackey, how many old bastards died last night?’ ‘1,500!’ ‘Smashing! That’ll free up some housing stock!’ You know what us pensioners are? Lepers. We take, take, take and gie nothing back, and they hate us for it. They cannae wait to bury us!”

I would take issue with the assumption that older people ‘take, take, take’, as older Londoner’s economic contribution to London has been evidenced, and the intangible contributions, while harder to quantify, are myriad. This is satire. I’m certain that Tony Blair didn’t celebrate older people’s deaths.

But the point is clear; successive governments have not done anywhere near enough to help older people survive the winter.

I clearly don’t advocate stealing electricity, but being a ‘King of ‘leccy’, as Winston says, keeps Craiglang’s residents alive. Crime doesn’t pay but in this case, as Jack says, “…it fair warms you up, doesn’t it?!”

When Jack finally succumbs to the scheme because of the prospect of a warm house, he shouts at Victor: “I don’t know about you, but I like the notion of surviving the winter!”

No older Londoner should die because they can’t heat their house.

It’s a tragedy and a scandal that’s not the case.

Still Game grabs a perfect score; Celia Imrie plays home-help Mrs Begg in one episode (!!!) and though not set in a care home, there are several older business owners (see S02E06 ‘Scran’.)