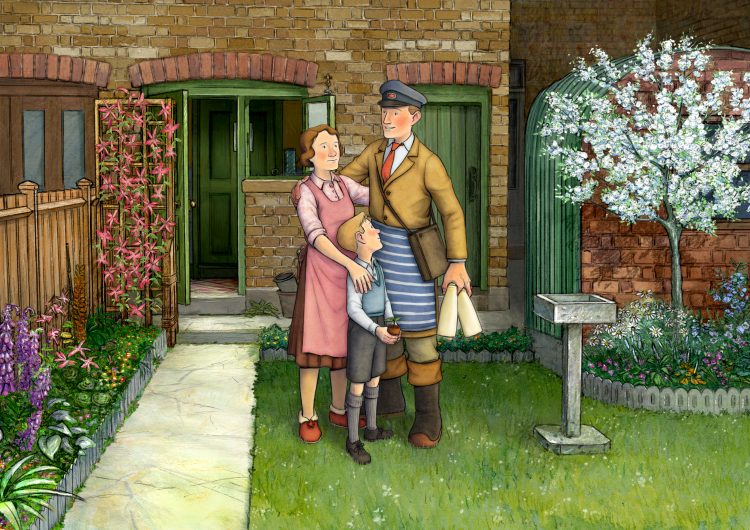 There’s a slight change to our format this month, as we look at ageing in film, rather than our usual topic of ageism. This month’s blog follows our trip to The Soho Hotel to see the film adaptation of Raymond Briggs’ graphic novel Ethel and Ernest. You can view last month’s article on the vibrant world of Up here.

When I was in Junior School, there would always be one day in the final week of the Winter Term which was basically a free-for-all. To celebrate the run-up to Christmas we were allowed to miss lessons, bring in board games, and eat party food. It was glorious. But the best part of the day was always the moment when our teacher would wheel out a twenty-year-old television set for us all to huddle round and watch an animated film together.

Now, I had always thought that such carefree joy could never be replicated in the workplace. You can, therefore, imagine my delight when I found out that Age UK London had partnered with Universal Pictures Home Entertainment Content Group to put on a free showing of Ethel and Ernest for forty-five older Londoners at The Soho Hotel. Especially once I discovered that I would get to come along for the day out – and in the last week of “term” no less!

It is at this point, that I must recommend that if you ever get the opportunity to make a complimentary visit The Soho Hotel’s “Screening Room 2”, you should grasp it with both hands. Every seat is a luxury armchair fully fitted with an adjustable tray table for drinks and snacks, both of which enhanced the enjoyment of the film tenfold.

And Ethel and Ernest was already a very enjoyable movie to begin with.

A film that is both heart-warming and heart-wrenching, Ethel and Ernest follows the lives of Raymond Briggs’ own parents from their first chance meeting in 1928, through the birth of their son in 1934, to their deaths, within months of each other, in 1971.

In doing so, the movie depicts some of the most defining periods of the twentieth century, taking us through Ethel and Ernest’s experiences of the Great Depression, World War II, right up to the moon landing of 1969.

As a result, there’s a great deal to take away from this film.

Firstly, it acts as a useful historical guide, for both children and adults. This occurs not only by displaying some of the most famous moments of the twentieth century, but also by showing them from the perspective of Briggs’ parents. Consequently, we hold an emotional investment in events that we normally only contend with in written form, which typically offers far less scope for emotion and empathy.

For example, whilst we have all read about the evacuation of children from the cities in World War II, the sense of sorrow and loss is rarely displayed as clearly as Ethel’s reaction to the news.

Equally the film resonated hugely with our audience of older viewers, with the vast majority of scenes touching upon many of their real life experiences. The stunning animation of famous objects such as the Morrison Shelters or Ernest’s electric milk float also plays a large role here.

Yet far from just displaying the narrative of the twentieth century, Ethel and Ernest also allows us to draw out a number of key themes for discussion.

One key aspect of the film is the prevalence of technology and the speed at which technological change occurs. Over the course of the story we see Ethel and Ernest repeatedly renovate and restructure their house to fit the ever-changing world in which they live. From gas cookers, to electric fridges, and even this brand new device “the television”, we’re given a real insight into just how quickly the twentieth-century moved and how important it was to people like Brigg’s parents to keep with the times.

That said, even amongst the technological progress, there’s still the feeling that nothing has really changed. When Ernest’s step-mother comes to visit, she sends the couple into fits of laughter over her concerns that she herself can be heard on a national scale through the wireless radio. Such exchanges continue to this day, only with different gizmos and gadgets at their centre.

Social differences are also explored, as Ethel’s conservative viewpoints and aspirational ambitions are contrasted with Ernest’s dyed-in-the-wool socialist beliefs throughout.

Accordingly both banter back and forth across the years, calling out each other’s party of choice for their failings, neither getting the upper hand for long. Though, admittedly Ethel’s rejection of Ernest’s sexism when a certain young female MP appears on the scene makes a lasting impression.

These social shifts are played out alongside the aforementioned technological advancement. Ethel’s desire to rise up the social ranks is often manifested in her longing to purchase the latest equipment and to spurn what she refers to as “working-class” forms of living.

Yet amongst the portrayals of technology and social standing is one central theme: ageing. Ethel and Ernest displays the process of growing older with a level of tact and honesty that few films match. It bares a certain similarity to the poignant first ten minutes of last month’s selection Up, only drawn out over the course of ninety minutes.

As a result, we are made to feel the impact of the ageing process all the more closely, as we truly get to know both Ethel and Ernest, through all the highpoints and the inevitable lows. Consequently, the final few scenes are genuinely affecting, as we see both begin to struggle more and more with their daily routine and eventually succumb to illness within months of each other.

Though it is a genuinely moving film, Ethel and Ernest does more than just pull at the heartstrings. This is a movie that teaches and explores across a wide variety of issues and subject matter with both humour and pathos. It’s compulsory viewing this Christmas.

Ethel and Ernest is available to watch on BBC1 at 19:30 on Wednesday 28th December. Alternatively you can pick up the DVD upon release on January 2nd 2017.