There’s some kind of unwritten life rule that states it’s always harder to get out of bed on Sunday mornings. Mondays and Wednesdays come a close second, but it’s Sunday mornings that take the prize. This is especially true when there’s frost on the window pane and you need to travel across to Victoria Park to run 5 kilometres dressed as Santa Claus. As you do.

So, why were we doing this? I think we all asked ourselves that question at some point during the day. For me, that moment came upon arriving onsite to discover it was so cold that the Burdett-Coutts fountain had frozen over…

Seriously though, the “why?” is quite simple – we had all pledged to raise money for Age UK London as part of our largest fundraising drive for many years. As a result, we had to get pretty good at explaining to various family and friends the exact reasons why they should sponsor our fundraising bid.

It went something like this: Age UK London works to promote and represent the views of older Londoners, by identifying the issues that affect older people in the capital and engaging with politicians to enact change. We campaign on the issues that make a difference to older Londoners and we work alongside other older people’s organisations across London to enhance services.

If at this point they still weren’t sold, that was when we mentioned the sweetener – “oh and we have to wear a Santa costume for the entirety of the 5k.” This last part drew donations from even my most compassionless friends, though admittedly most of these were keener to revel in my hatred of fancy dress than they were to give to charity. 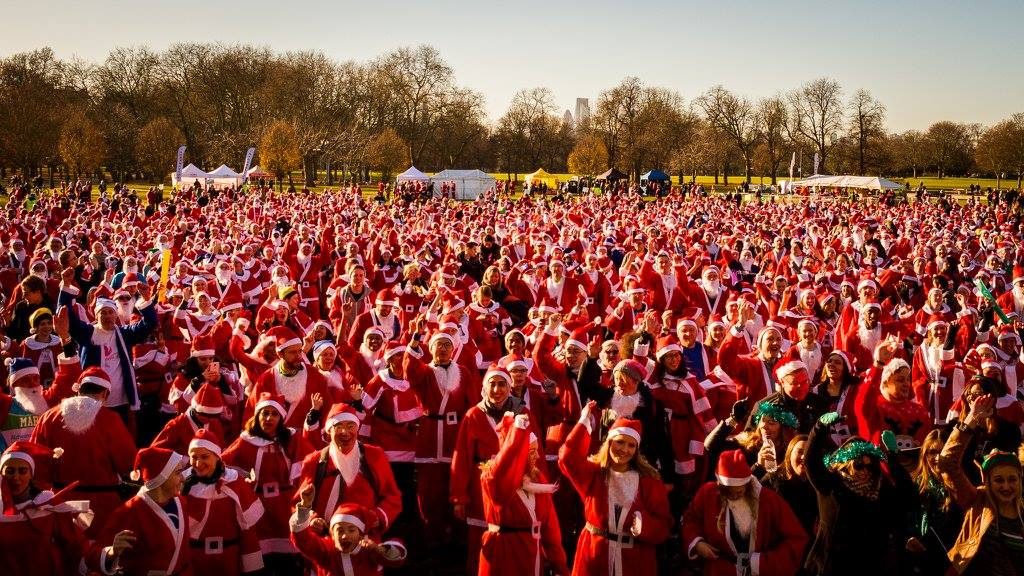 Still the joke was on them, because it turns out that on a cold winter’s day one of the best things to wear is a Santa costume – and that’s before you factor in the added warmth of a fake beard. Plus with a whole field of Santas milling about before the race began, it suddenly started to feel like those who weren’t in costume were the odd ones out.

This festive camaraderie amongst us Santa Clauses was further heightened by a group warm-up, led by a microphone-wielding fitness guru from atop the main stage. It’s worth noting at this point that if you’ve never witnessed 3,000 Santas performing star jumps before, you’re missing out.

And then, it was time to run.

Now, when I say “run”, I actually mean “shuffle” – the initial stages of the 5k saw every Santa crammed into a very thin pathway which made any forward momentum a struggle. Still, things soon opened out and at least there was lots of fake snow on the starting line to keep us entertained! 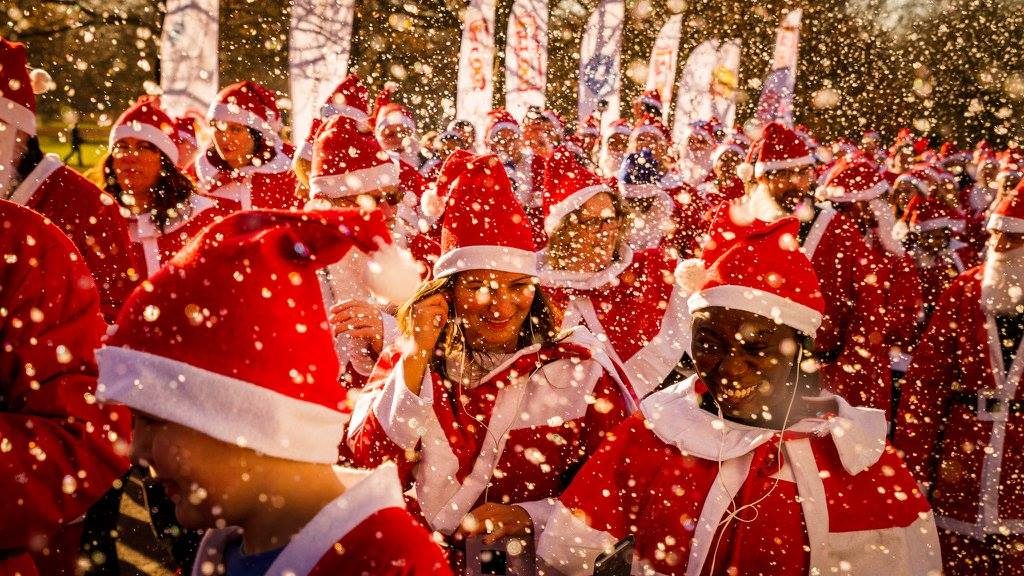 Having formed a sort of peloton with two colleagues, we set about employing a vaguely quick walk that could be described as a jog by only the kindest of observers. Yet even though we weren’t making the fastest of progress, it was still somewhat disheartening to be lapped by those who had taken the option of running double the distance.

Yet we ploughed on and managed to finish our 5k in just under an hour. Now, was it also a little depressing to find out that our colleague Jess from the Business Directory had managed to run 10k in nearly the same amount of time? Perhaps. But any such thoughts were soon banished by the reception of a medal and a mince pie at the finish line.

Perhaps slightly more important than the collection of goodies at the end of the race, was the knowledge that we’d managed to raise a significant amount of funds to continue making London a great place to grow older.

To do so whilst having a great day out, is a key part of what makes the Santa Run such a brilliant experience – we hope to see you there next year!

If you wish to donate to Age UK London, but missed the chance to sponsor someone, you can contribute here.