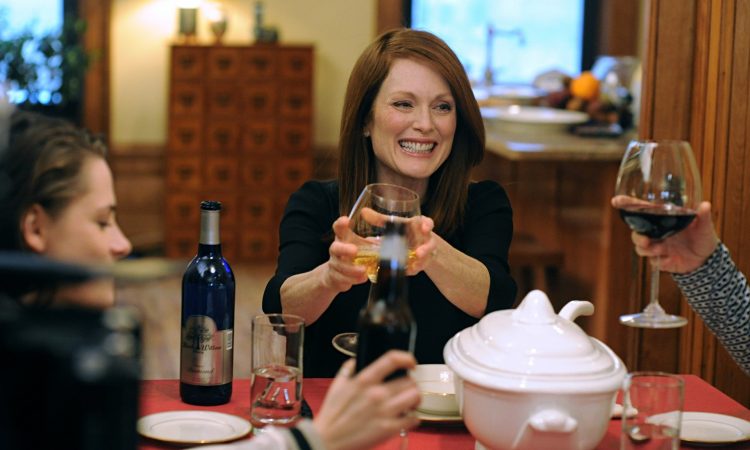 Welcome to the second edition of our new monthly series on ageing in film. This month Danny Elliott studies Still Alice and questions how age can affect our reaction to tragedy. You can also read last month’s article here.

Age UK London works with and for the 2.2 million people aged 50+ in London. The issues faced by a 50 year old may be very different from that of an 85 year old; some of the work we do includes helping people plan for the future, alongside offering support for those re-entering employment or retraining for a new role.

That ‘lower age limit’ may surprise you – if you are over 50, you may even be affronted… ‘I’m not old!’ We’re certainly not saying you’re old either – but we are here to support you.

Played by Julianne Moore (aged 53 when the film was released, an older person herself) in an Oscar winning performance, the Professor of Linguistics at Columbia University, New York, finds herself diagnosed with early onset Alzheimer’s, a rare form of the disease. Grey’s Anatomy, a US hospital drama, has also dealt extensively with the same theme.

The film starts with Alice at her 50th birthday party, celebrating with family and the first minutes of the film show some small signs of where the narrative is going – she misunderstands someone’s conversation, forgets a word in a lecture (blaming it on too much champagne) and gets momentarily lost while out for a run in Manhattan.

Alzheimer’s can sometimes be simplistically boiled down to ‘losing your memory’. The film powerfully conveys someone who feels like they are losing everything, particularly the struggle of losing their words… their ability to communicate.

The first lecture we see Alice give is entitled ‘Language Acquisition’ – she is an expert on how babies learn their mother tongue. The film slowly shows Alice’s own ‘Language Loss’. She has an app where she plays a word game against her daughter, gradually using shorter words. She tests herself to remember words like stethoscope and pomegranate after writing them on a blackboard. At Christmas, she asks someone to ‘grab the cheese thing’… the cheese board. These are small things individually, but incredibly frustrating for Alice.

Her husband, played by Alec Baldwin, initially tries to downplay her symptoms: “This is completely insane, it doesn’t make sense. Memory lapses are just a sign of getting older… the other day I couldn’t remember the word ‘glucose’.”

Alice responds: “It’s not like that – something just drops out from under me. Why don’t you take me seriously? It feels like my brain is failing, dying and everything I’ve worked for in my life is going away.”

Later in the film, her daughter, Lydia, asks her what having Alzheimer’s is like. Alice thanks her –she’s the only person in the film who asks her this question – and responds:

“It’s not always the same. I have good and bad days. On good days I can almost pass as a normal person. On my bad days I can’t find myself. I’ve always been so defined by language and words, but sometimes I can see the words hanging in front of me but I can’t find them – and I don’t know what I’ll lose next.”

John, Alice’s husband, struggles to come to terms with his wife’s diagnosis. Initially, he tells her she can’t possibly have the illness. He then says that they can get through it. When Alice misses a dinner with friends, he is angry; “We have to keep the important things going, otherwise we’ll go crazy.”

Alice asks him to take a sabbatical from work, saying, ‘This might be the last year I’m myself’, but John can’t bear to hear those words and avoids the conversation several times. After getting a job offer in Minnesota, he suggests that moving could benefit both of them, but it would mean he couldn’t take the time off. Alice says: “You don’t want a year off with me. You don’t want a year where you are just watching this.” Baldwin is silent.

He later moves to Minnesota on his own, with the blessing of the wider family, while the couple’s daughter, Lydia, moves in to care for and support Alice. Just before leaving, he asks Lydia, again, if she minds giving up so much and moving back home. She is sure, and he says, voice breaking in the middle of the sentence, “You’re a better man than I am.”

They do have tender, loving moments, throughout the film but they are few and far between. The film doesn’t condemn John for anything he says or does, but you do feel that Alice would benefit from sustained time with her husband.

One big question that this film left me with was this: when is a death no longer thought of as a ‘tragedy’? We don’t do this on purpose, but as a society we often change the way we talk about death dependent on someone’s age. At a certain age, when someone dies, we start to hear that they ‘had a good innings’, or that ‘at least they lived a full life.’ Yet while a full, and fulfilling, life should be celebrated, it doesn’t lessen the sorrow, sadness and indeed tragedy of a life lost.

This film, based on a novel by Lisa Genova, is about someone with early-onset Alzheimer’s. Is that more tragic than someone with (just!) ‘late-onset’ Alzheimer’s – someone who develops dementia in their late 80’s?

This is an emotional film, and seeing someone ‘struggling’ with Alzheimer’s has a huge impact, but it cannot be sad solely because it is a ‘younger, older person’ who is dealing with the diagnosis.

I remember reading a Guardian article published when the film was first released where people living with dementia gave their verdict on the film. Most praised its realism. An interviewee named Keith said: “The film confronted each stage I’ve gone through, like a checklist. It captured how dementia crept up on me, how it knocked my self-esteem and brought doubts into my mind before I even knew what I was dealing with. It captured how insidious the disease is, how it can subtly eat away at you. It captured how I tried to fight it, how I found coping strategies, how I tried to hide it.”

“Good morning. It’s an honour to be here. The poet Elizabeth Bishoponce wrote: ‘The Art of Losing isn’t hard to master: so many things seem filled with the intent to be lost that their loss is no disaster.’ I’m not a poet, I am a person living with Early Onset Alzheimer’s, and as that person I find myself learning the art of losing every day. Losing my bearings, losing objects, losing sleep, but mostly losing memories…[she knocks the pages from the podium]… I think I’ll try to forget that just happened… [crowd laughs].

“All my life I’ve accumulated memories – they’ve become, in a way, my most precious possessions; the night I met my husband, the first time I held my textbook in my hands, having children, making friends, travelling the world. Everything I accumulated in life, everything I’ve worked so hard for – now all that is being ripped away. As you can imagine, or as you know, this is hell. But it gets worse. Who can take us seriously when we are so far from who we once were? Our strange behaviour and fumbled sentences change other’s perception of us and our perception of ourselves. We become ridiculous, incapable, comic.

“But this is not who we are, this is our disease. And like any disease it has a cause, it has a progression, and it could have a cure. My greatest wish is that my children, our children – the next generation – do not have to face what I am facing. But for the time being, I’m still alive. I know I’m alive. I have people I love dearly. I have things I want to do with my life. I rail against myself for not being able to remember things – but I still have moments in the day of pure happiness and joy.

“One thing I will try to hold onto though is the memory of speaking here today. It will go, I know it will. It may be gone by tomorrow. But it means so much to be talking here, today, like my old ambitious self who was so fascinated by communication. Thank you for this opportunity. It means the world to me. Thank you.”

We hope you enjoyed this month’s film blog. Last month we ran the rule over The Lady in the Van, which you can read here.